Darjeeling is located in the Indian state of West Bengal .Darjeeling is reputed as the” Queen of hill”. The state influence the so many tourist places including magnificent view of the Kanchenjunga snow peak, Buddhist Monasteries, Historical churches , Temples, Rolling tea on mountain slopes, Museums , Art gallery park, gardens, waterfalls, and cable car riding.

Batasia Loop :
The Batasia Loop is a spiral railway created to lower the gradient of ascent of the Darjeeling Himalayan Railway in Darjeeling district of West Bengal, India. It is 5 km from Darjeeling, below Ghum. Batasia loop is a popular tourist destination. There is also an Eco Garden in Batasia. Batasia Loop can be visited when the famous ‘Toy Train’ makes its way across a looped track those transverses through some beautiful parks.

Tiger Hill :
Tiger Hill is situated 13 km away from the city and can be easily accessed through roadways from Darjeeling. The nearest major railway station to Tiger hill is Siliguri Jn Train Station which is 33 km away.Tiger Hill offers one of the most beautiful panoramas of the Greater Himalayas. The summit of Ghoom is the highest point of Tiger hill. It is famous for the amazingly beautiful view of the Mount Everest and Mount Kanchenjunga.

Singalila National Park :
Singalila National Park is a beautiful place, located in the Darjeeling district of the state of West Bengal. This park was established in the year of 1986. Total area of the park is 78.60 Km. The national park is very popular for its trekking trails. Trekking is at its peak during March and April when rhododendrons and orchids bloom. The park is part of the Eastern Himalayas and situated at a high elevation with 1900 meter to 3,630 m from the sea level. The Park makes the border line with neighbor country Nepal to the west and with state Sikkim to the North.

Observatory Hill :
Observatory Hill is also known as Makal-Babu-Ko-Thaan. It is one of the oldest sites in the Darjeeling. The Observatory Hill is located at the Mall area and is encircled at its bottom by the Mall Road. The place has a rich historical backdrop. The Bhutia Busty monastery was originally located here. Now the hill has the Temple of Mahakal. The hill is quite popular among tourists due to its Hindu and Buddhist Temples. There are several important places around Observatory Hill.

Mahakal Temple :
Mahakal Temple is situated on the Observatory Hill in Darjeeling; the Mahakal Temple represents a unique amalgam of Hindu and Buddhist cultures. This Temple stands where the original Darjeeling Monastery was present in olden times, before it got destroyed in an invasion and was eventually shifted to a new location with a new name. According to beliefs, the Temple enshrines three Shiva Lingas, which got manifested on their own in the year 1782. This Temple has three gold-plated idols of the widely-worshiped trio of Hindu Gods – Brahma, Vishnu and Shiva.

Lloyd's Botanical Garden :
Lloyd's Botanical Garden is one of the oldest establishments of its kind, located in the heart of Darjeeling. The garden, established in 1878, was named after William Lloyd, who provided the required land for it. Sprawling across an area of 40 acres, it is dotted with tall trees of bamboo and oak. Carpeted with flowers of Rhododendron, Geranium, Magnolia and Cotoneaster, the garden gets covered with different hues of nature with the arrival of spring. Rare and endemic orchids found in the Singalila Ridge are also preserved in this botanical garden, which also has an amazing collection of 150 cactus and succulent plant species.

Mirik :
If you are planning a vacation in Darjeeling area, it can be a great idea to spend a couple of days in Mirik and then make an onward journey to Darjeeling or other places. You can also do the reverse. In fact Mirik lies almost halfway between Siliguri/NJP and Darjeeling on the alternative route that goes to Darjeeling through scenic tea estates. Mirik is a small hill town and part of Kurseong subdivision and within Darjeeling district.

Lava & Lolegaon :
Lava and Loleygaon are two quaint mountain hamlets in Darjeeling district under Kalimpong block and surrounded by forests. Altitude of Lava is 7,700ft while Loleygaon (also known as Kaffer village) is at a lower altitude of 5,500ft. Since they are close to each other (about one hour driving distance between the two), most tourists make a combined visits to these two places.

Rishyap or Rishop :
Rishyap is a tranquil, small rural settlement of the Lepcha community in the mountainous landscape at an altitude of 8,500ft. It is only about 28kms to the east of Kalimpong in Darjeeling district. If you are visiting Lava, there is a motorable road of 11kms and also a trekking trail of 4kms from Lava to reach Rishyap.

Kalimpong :
Kalimpong was earlier a subdivision of Darjeeling district, but now a separate district of West Bengal effective 14th Feb 2017 with an area of 1,056 square kilometers and inhabiting 49,403 people (as per 2011 census). Kalimpong town itself is small, located about 2.5 hours drive from both Darjeeling and Siliguri. But the town and its surrounding areas offer immense opportunities for tourism.

Darjeeling Mall and Chowrasta :
Located in the heart of Darjeeling town, the Darjeeling Mall and Chowrasta is one of the best places in Darjeeling that one cannot afford to miss on his or her trip to Darjeeling. It is a rendezvous of people from all over the world and is notable as a popular tourist hangout in Darjeeling. Besides hosting several boutique shops, restaurants and eateries… this place is just your own pick where you would love to get hold of the nature at its best. One side of the mall is thickly layered with pine forest under the shadow of the towering mountain peaks, the other side lies shops of traditional garments, handicrafts, carpets, rugs, paintings, semi-precious jewelleries and metalwares. Some of the noted shops, restaurants and eateries in the area are Habeeb Mullick & Son, Curio Corner, Nathmulls Tea & Sunset Lounge, Golden Tips, Life & Leaf, Jolly arts and Bhutan Tibet Art Shop. The Hawa Ghar and the huge golden color statue of the Nepali poet Bhanubhakta Acharya are the two major attractions in Chowrasta. The Bhutia Market, which is close to Chowrasta is another attraction for shopaholics.

Rock Garden and Ganga Maya Park :
Both these places around Darjeeling town are haven for botanists. The Rock Garden, which is approximately 10 kilometers from Darjeeling town, is set with picturesque and colourful terraced gardens dotted with highly diversified flowering plants… blazing the rocks and cliffs at different levels. The Chunnu Summer Falls is another additional feature that makes the park more scenic. On the other hand, 3 kilometers ahead is the Ganga Maya Park, which is another nature park with a narrow gushing stream flowing through it. The park also hosts gardens dotted with varied species of colourful flowers and a lake. Tourists can also enjoy Gorkha folk dance at Ganga Maya Park.

Darjeeling Ropeway :
Withal the natural element in just one view, the Darjeeling Ropeway, which is also known as the Rangeet Valley Passenger Cable Car, offers a refreshing getaway. From the ropeway you can enjoy the spectacular view of the valley below that is bedded with lush green tea gardens and dense forest and cut by several small gushing streams. It is one of the best tourist spots in Darjeeling where one can spend some ideal hours in the tea estate and enjoy a nature walk.

Ghoom Monastery :
The largest monastery in Ghoom, which was built in 1875 by Lama Sherab Gyatso and belongs to the Gelug sect, the Ghoom Monastery is one of the major Buddhist pilgrimage places in Darjeeling district. It is approximately 8 kilometers from Darjeeling town. Besides the prayer hall, the monastery houses a 15 feet high statue of “Maitreya Buddha”, images of Buddha’s disciples, and many Buddhist texts. 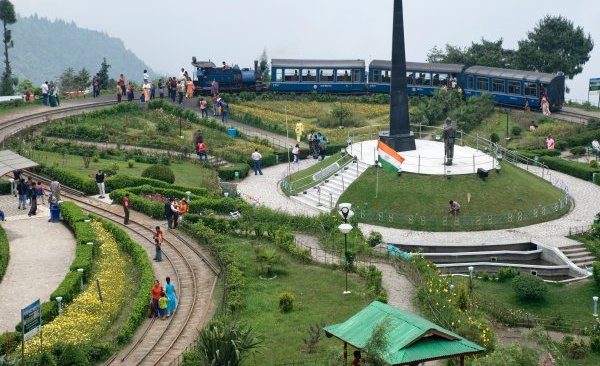 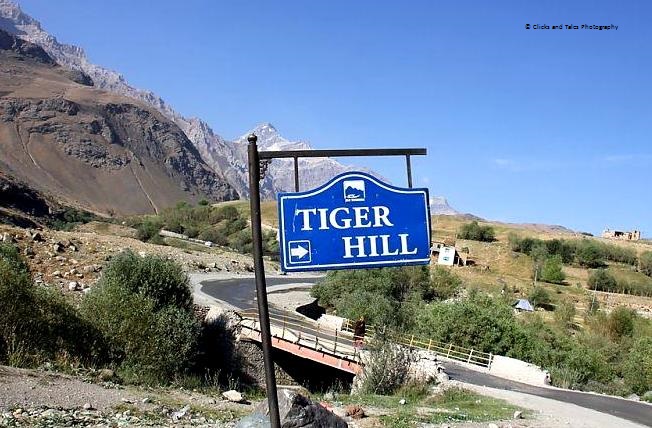 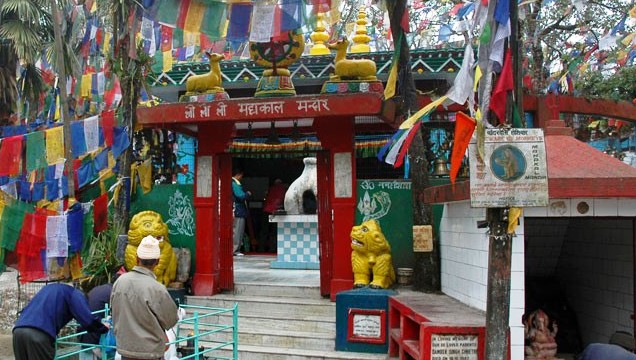 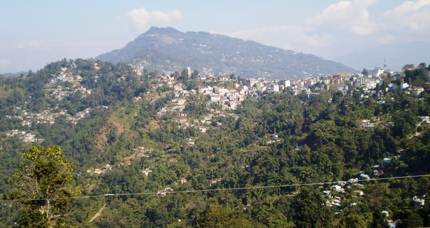 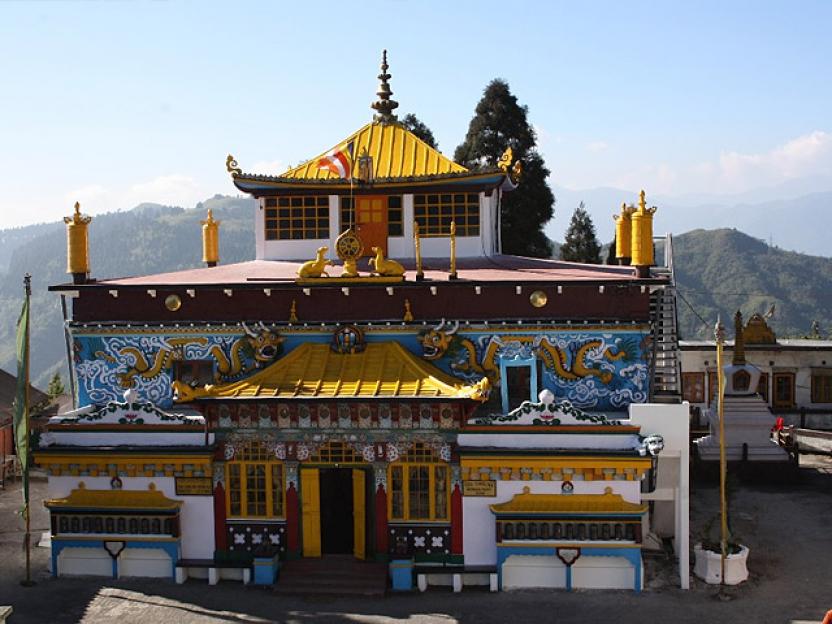