"India's Own Moonland" Leh, a high-desert city in the Himalayas, is the capital of the Leh region in northern India’s Jammu and Kashmir state. Originally a stop for trading caravans, Leh is now known for its Buddhist sites and nearby trekking areas. Massive 17th-century Leh Palace, modeled on the Dalai Lama’s former home (Tibet’s Potala Palace), overlooks the old town’s bazaar and mazelike lanes.Ladakh is a region in Indian state of Jammu and Kashmir that currently extends from the Kunlun mountain range to the main Great Himalayas to the south, inhabited by people of Indo-Aryan and Tibetan descent.

Pangong Lake :
At an altitude of 4350m and a five hour drive away from Leh, is a lake that leaves all its visitors enchanted, fascinated and in nothing but awe at it's sheer expanse, sparkling color and backdrop.

Leh Palace :
Modelled on the basis of the Potala Palace in Lhasa, Leh Palace was built by King Sengge Namgyal in the 17th century. The palace is nine storeys high, where the upper floors used to accommodate the royal family, while the lower floors held stables and store rooms. The roof provides panoramic views of Leh and the surrounding areas, as the mountain of Stok Kangri in the Zangskar mountain range is visible across the Indus valley to the south, with the Ladakh mountain range rising behind the palace is visible in the north.

Tso Moriri Lake :
Between Ladakh and Tibet, lies Moriri Lake, the largest high altitude lakes in India, at an altitude of 4,595m. This stretch of sparkling, crystal clear, alkaline water is accessible only during summer months.

Nubra Valley :
Nubra valley is a dash of lush greenery in Ladakh's dessert and moonlike landscapes and slopes, being almost 3000m lower than Leh. Snuggled between the Karakoram Range and nourished by two rivers, Nubra is brimming with Sea buckthorns and Alfalfa.

Magnetic Hill :
With anti-gravitational effect, this is the only magnetic hill in India. Landmarked by a yellow notice board that spells out instructions and asks you place your car on neutral gear right on the spot marked by white paint, this one will leave you in awe as your car will begin to move uphill on its own, baggage and all. 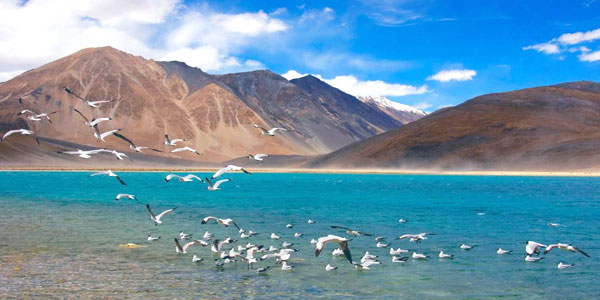 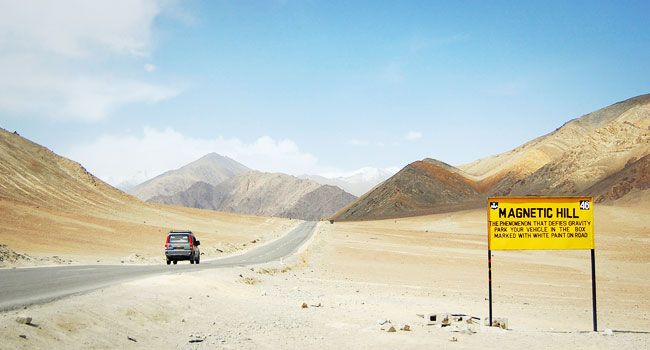